Harold is my oldest friend and one of my most treasured possessions. He was given to me by my cousins for my third birthday (pictured below) and has been with me ever since. He has changed a little since then, his nickname ‘Flat Harold’ comes from the fact that he is now incredibly thin and threadbare (scroll down for present day pic). Infact, when we first discovered this photo we didn’t recognise him! What a looker he was back in the day. He even had a jaunty neck-a-chief! 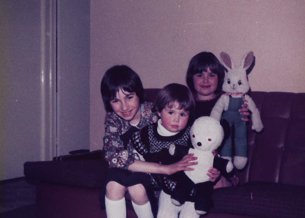 (I'm the slightly grumpy looking one in the middle. My cousin Lynne at the back is holding a plump Harold).

In the early years I took him everywhere with me - we even had matching denim dungarees as you can see from this photo of me with my nan in Germany. 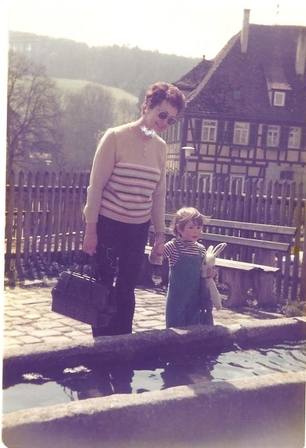 Unlike the sad ending for Woody in Toy Story I took Harold to university with me (clearly the coolest kid on campus??). To my delight one of uni friends Anna also had a similar soft toy called Monkey who must have been from the same original batch. She once kidnapped poor Harold and held him to ransom (black tape, photos…the full works) in response to which I stole Monkey and hung him out of the top window of our halls of residence. Oh how we used our study time wisely!

Harold survived the intervening years and is now in the loving hands of my daughter, Rose. It was a rocky road at first when poor Harold was dropped or left in various locations around West London. We once rescued him from the bin in the local park. I honestly would have been heart broken had we not have recovered him (and how could someone have binned him!). 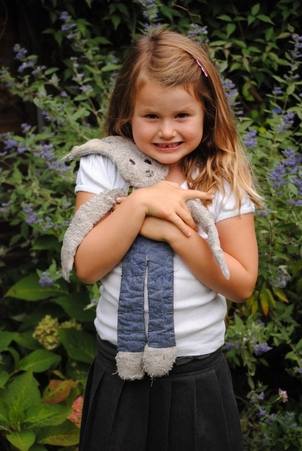 (Rose & Harold as he looks today)

More recently my auntie, who is a gifted seamstress, decided to make a modern day Harold for a friend’s baby. The resulting rabbit captured the magic of Harold so well and was met with such delight that we decided to make a few girl and boy rabbits for the shop, each with their own looks and personality. Our first boy rabbit, George, was sold to a little boy the other day. Rosamund, Flo and Mauve (pictured in that order below) are still looking for a good home…