The term Circular Economy first entered my consciousness when reading an article in the paper about Ellen MacArthur, of solo round-the-world yachting fame back in the nineties. I was surprised to learn about her journey; from record breaking yachtswoman to spokesperson for a new kind of economic model, one that sets out to make better use of the world’s resources and eliminate waste - the Circular Economy.

What drove this unexpected divergence from a life at sea? Sailing solo gave MacArthur a profound understanding of what it means to be self sufficient. She spent weeks at sea, with only a limited amount of possessions (and her own considerable wits) with which to survive.  She would then return to dry land and ‘normal’ life, only to be struck by how little thought we give these same resources - all the things we use in everyday life - and how quickly we dispose of things.

‘ It suddenly dawned on me with the second round-the-world tour that our economy is no different than my boat. We have a world with finite resources: it’s absolutely no different from the boat.’

She has since set up the Ellen MacArthur Foundation, targeted towards industry and big business with a view to convincing them of a new, better way of doing things. In order to do this, she has brought the current model - referred to as a Linear Economy - under the spotlight.

How does the economy work at the moment? In this day and age, a product is made - for example, a plastic bottle or a mobile phone - we use it and then, when we’ve finished with it or it breaks or a new version comes along, we throw it away as waste. All of the natural resources (water, energy, metals) used to make that product are lost. This process of consumption and waste is a straight line, a Linear Economy.

Single use plastics, in particular, can be produced so cheaply that we consider them of little or no lasting value. We might buy takeaway food, drink and groceries that come packaged within a plastic cup, bag, tray, but the plastic resource itself is immediately disposed of, making the journey to landfill even shorter.

Whether resource is used for a few minutes (your coffee cup), a few months (your fashionable top) or a few years (your mobile phone), the Linear Economy relies on (mostly mass) consumption, with a lasting legacy of waste and a sort of ‘out of sight, out of mind’ philosophy.

The difference with a Circular Economy is that the prevention of waste is at its very core. It is all about designing and producing things in a way that keeps them in use for as long as possible, in which time they should be mended, shared, reused and repurposed. At the end of a long life, the product’s raw components can be used again to make something else, or else safely biodegraded.

For example, there are up to 60 metal elements like copper in a mobile phone, elements that are becoming more rare and expensive by the day. All of these elements can be recovered and reused, but for the most part they are being thrown away as waste.

The circular concept is a reflection of how our ecosystem works - the cycle of life. Nature functions by building up and breaking down again, before regenerating into new life. We’re currently producing stuff that doesn’t break down, and it doesn’t take a genius to work out that this will (and is) ending badly. We have a mounting global waste problem that is becoming impossible to ignore. 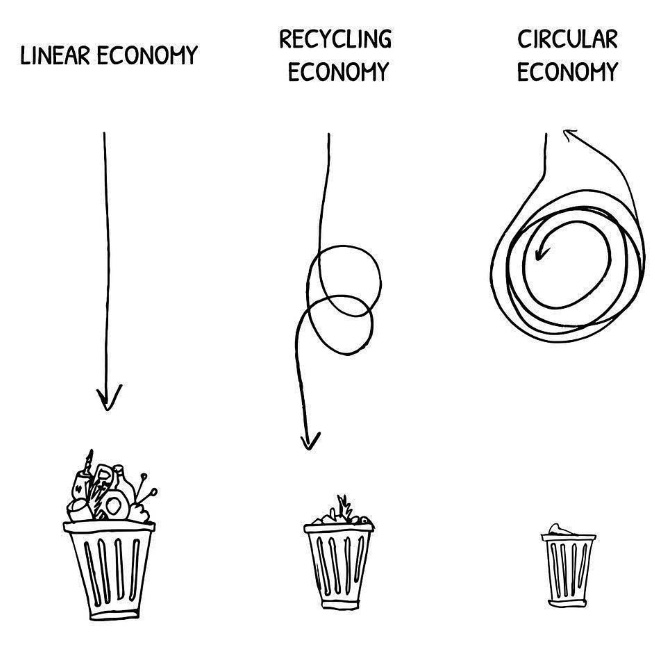 There are already many examples of individuals and businesses working along Circular Economy principles. My son, Will, came home from school yesterday and told me about a UK company who are making roads from recycled bottles and bags. Designed by an ex scientist, the roads are being trialled around the UK and have the potential to replace crude-oil based asphalt to produce roads that last longer and are kinder to the environment.

Another Indian company has created edible cutlery, to replace the plastic cutlery used so widely for street food. The cutlery is made from flour, and even comes as plain, sweet or savoury! If it is thrown away, it will naturally biodegrade in less than three days.

I’ve seen videos and features on many innovative products; like bioplastic bags made from starch and sugar that break down in a matter of weeks, skateboards made from old fishing nets and Timberland boots made from old tyres.

‘Timberland announced a partnership with tyre manufacturer and distributor Omni United on Monday to create the first line of tyres ever purposely designed to be recycled into footwear outsoles at the end of their lifecycle.’ - Mike Hower, GreenBiz.com

At The Wise House, we are starting to include information with all of our products about their ‘end of life’ so that customers can understand what will happen to a product when finished with. For example, our Bee’s Wrap, which replaces plastic wrap for food, can be reused for up to a year. At ‘end of life’ it can be composted, as it is made from natural materials like organic cotton and beeswax.

For her part, MacArthur has been successful in partnering big industries and stakeholders like Google and the World Economic Foundation. As well as implementing circular initiatives in their own organisations, they provide role models within industry as a whole. Thanks to her work, in 2017 the World’s first ‘standard’ for the circular economy was launched,

‘This standard provides a valuable introduction to the practical action organisations can take to accelerate their transition to a circular economy.’ Francois Souchet, Project Manager Insight and Analysis - Ellen MacArthur Foundation

Sky recently became the first FTSE-100 company to make a commitment to be single-use plastic free by 2020, and have committed £25 million to a plastic innovation fund with the aim to eradicate single-use plastics from supply chains around the world.

Given what we now know and can see about the effects of waste and plastic pollution, and the fact that resources are become increasingly scarce, a new more sustainable economic model is needed. What strikes me most is that the approach itself is nothing new; it’s the ‘make do and mend’ attitude of previous generations, when resources were simply too valuable to waste. The Circular Economy is surely just plain common sense.